You Are Here: Breakthrough Prize for Fundamental Physics 2016 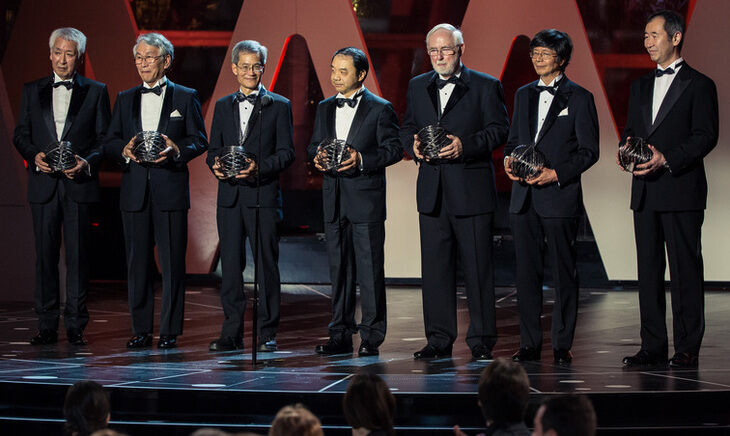 After the Nobel Prize for Physics, another highly renowned science prize is awarded for the discovery and the study of neutrino oscillations. The "Breakthrough Prize for Fundamental Physics" is valued at 3 million US Dollar and goes in the year 2016 to about 1300 scientists of the neutrino experiments Super-Kamiokande, SNO, KamLAND, Daya Bay, K2K and T2K. As members of the T2K collaboration also seven scientists of the III. Physics Institute are among the laureates. The award was handed over to the heads of the different research groups at a ceremony in the NASA Ames Research Center in Moffett Field, California.

In the T2K experiment, a neutrino beam is sent over a distance of around 300 kilometers across Japan in direction of the Super-Kamiokande detector. On the way, a part of the emitted muon neutrinos transform into other neutrino types, what is called neutrino oscillation. Before, the emitted beam is examined by a near-detector. In the research center J-PARC the T2K group of III. Physics Institute participated in the construction of this near-detector and now contributes to its operation. Currently, the group studies neutrino interactions within the near-detector in order to measure the composition of the neutrino beam and the cross sections of neutrino interactions. Recently, T2K also started to study the oscillation of anti-neutrinos. If differences show up with respect to the oscillation of neutrinos, this would be an indication of CP violation in the leptonic sector and a possible answer to the question, why the universe consists only of matter and not of anti-matter.

Another future project of neutrino physics, on which the institute is involved, is the JUNO experiment, a successor project of the also awarded Daya Bay experiment. We take advantage of the experience in the detection and measurement of reactor neutrinos, which we gained during our participation in the Double Chooz experiment. In the JUNO experiment, currently under construction, neutrinos emitted from two nuclear power plants in southern China, are examined in 50 km distance with respect to oscillation effects. In this way we hope to resolve the mass hierarchy of the neutrinos, i.e. to reveal in which order the mass states of the three different neutrinos types are arranged.