You Are Here: Physics Analysis

The main purpose of the CMS detector is to collect detailed information about the proton-proton collisions which happen at its center. The LHC, which provides these protons, collides bunches of protons with a rate of 50MHz, and each of these collisions is analyzed using multiple particle detectors. This leads to huge amounts of raw data, which needs to be organized and analyzed to reconstruct the individual particles that occured in the collision, and finally to allow for a deeper understanding of the principles of particle physics.

Our data analysis group is collaborating closely with many physicists around the world. Together we try to optimize the reconstruction algorithms used to identify individual particles, and push challenging new physics analyses. Hereby, we focus mainly on physics processes with the heaviest lepton (tau lepton) in its final states. 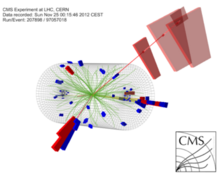 The \(\tau\) lepton is the most massive of the charged leptons and therefore provides a unique tool to probe the Standard Model, more speciﬁcally electro-weak symmetry breaking, and to search for new physics at the LHC. In July 2012, a new particle, which so far is consistent with the Standard Model Higgs boson, was discovered at 125GeV. This new particle was first discovered in the decay channels that involve bosons. The Standard Model also predicts the fermionic decays, in particular fermions from the third generation such as \(H\rightarrow\tau^-\tau^+\). A candidate event for this decay, where one \(\tau\)decays leptonically (\(\tau^-\rightarrow\mu^-\nu_\tau\bar{\nu_\mu}\)) and the other hadronically can be seen in the Figure.

The \(\tau\) lepton also plays an essential role in searches for new physic at the LHC. This is because in many new physics
models the new physics couples more strongly to the third generation of charged leptons. Using this final state, we want to further study the Higgs boson, study the Standard Model with high precision, and search for physics beyond the Standard Model.

\(\tau\)​ leptons occur in many interesting reactions at the LHC. Unfortunately, they are experimentally difficult to reconstruct because of neutrinos appearing in the decay. Hadronically decaying \(\tau\)​ leptons are usually treated as tightly collimated jet with low multiplicity. Algorithms for the identification of such objects are available in CMS and are developed in our group. Our group is involved in the analysis of interesting events with \(\tau\)​ leptons, including Higgs decays into two tau leptons.

If you are interestend in joining our group for a thesis, please contact us.