You Are Here: Magnetic-Resonance-Imaging (MRI) 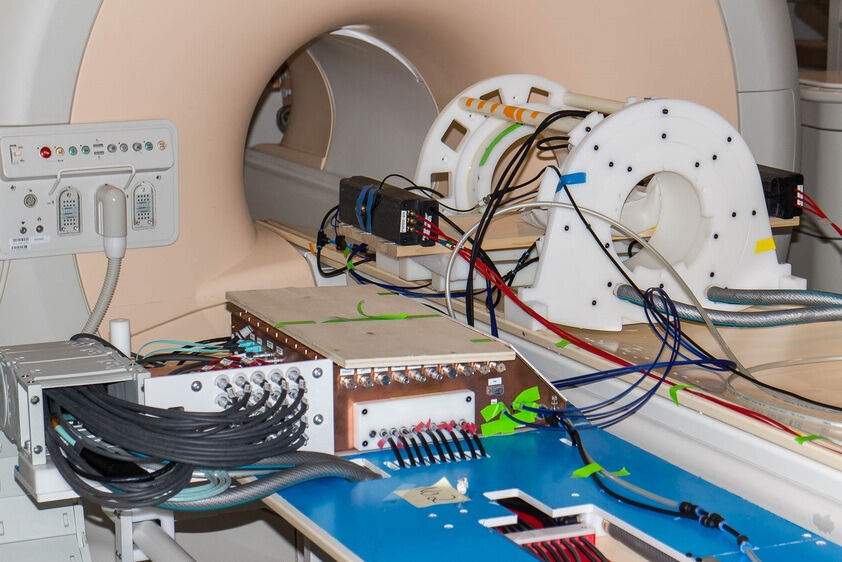 Magnetic resonance imaging (MRI) is an imaging technology, which is mainly used in a clinical environment. In contrast to other imaging devices (such as PET, SPECT, CT…), MRI is well-known for its high soft-tissue contrast. MRI does not utilize nuclear radiation and therefore is regarded as a non-invasive imaging modality. The basic principle MRI relies on is the so-called nuclear magnetic resonance: some atomic nuclei (in particular the protons in the hydrogen atom) in the target which is subject of the examination possess a nuclear spin. In an strong, external magnetic field (field strengths range between 0.1-15T), this nuclear spin with its magnetic moment results in splitting of the nuclei spin states (è Zeeman effect) yielding in turn a preferred orientation with respect to the external field and hence causing a measurable magnetization. A phase-synchronous excitation can be performed with a radio-frequencey (RF) electromagnetic field (at the so-called Larmor frequency which is proportional to the strength of the external magnetic field). Viewed from a macroscopic perspective, this excitation causes a deflection of the magnetization into the transversal plane (orthogonal to the direction of the external magnetic field). After the excitation, the magnetization vector in the transversal plane precesses and induces a measurable MRI signal in a receive coil. With the use of dedicated magnetic gradient fields, which spatially vary the magnetic field, a spatial encoding can be implemented. Hence, the acquisition of an image becomes possible. The magnetization in the transverse direction dephases with a characteristic time (T2) and the longitudinal magnetization recovers with the so-called T1 time. Both relaxation times (T1 and T2) are characteristic tissue properties and can be exploited to visualized different tissues. In order to provide images with high contrast, the image acquisition sequences (a sequences describes a series of RF pulses and gradient pulses) can be optimized with respect to the desired contrast. Therefore, an MRI acquisition is completely based on the application of static, strong magnetic field as well as on fast alternating EM fields.

Our group works on the integration of a PET detector inside a MRI scanner enabling the acquisition of simultaneous, hybrid PET/MRI acquisitions. Besides the characterization and minimization of interference problems occurring between both imaging systems, our group implements also new MRI sequences which enable the acquisition of specific contrasts. In addition, we have a strong focus on the MRI physics in order to develop data correction methods which compensates limitations of the image acquisition. The corrections might be in particular helpful in cases in which the image acquisition is disturbed by the aforementioned interference problems.