You Are Here: TPC Development

In high energy physics, a Time Projection Chamber (TPC) is a particle detector which provides a complete track information on charged particles traveling through a gas volume contained in the chamber. With a fast readout electronics it is possible to derive a 3D particle localization and tracking in a high-track-density environment. When a charged particle passes through the detector gas it produces primary ionization along its track. Due to a homogeneous electric field along the z-direction, electrons from the ionization drift with a constant velocity to be collected at a segmented anode plate. So in a first step, the TPC records a 2D projection (XY) of the 3D particle track (XYZ). The missing z-coordinate, is determined by two parameters: the drift time and the drift velocity which it closely related to the gas properties. Furthermore, in high energy physics experiments a magnetic field is often applied along the length of the TPC, parallel to the electric field, in order to minimize the diffusion of the electrons coming from the ionization of the gas and also to provide an additional information on the particle momentum which can be determined from the bending of the 2D projected image of the track.

The TPC readout has to fulfill two main requirements. A fast electronics and a high detector granularity for a good time and space resolution and hence for a better particle identification in a dense track-environment. Historically standard wire chambers have been used as TPC readout. In the last decade, the R&D of TPC detectors concentrated on the newly developed micro pattern gas detectors. Its two main species, Gas Electron Multipliers (GEM) and MICRO MEsh GASeous detectors (Micromegas) have been studied by our group. GEMs are thin foils with both sides metalized and with many small etched holes. By applying a voltage difference to the metalized sides electrons drifting towards the GEM are amplified in the large electric field in the hole region. A Micromegas has an only 50 to 100 μm wide amplification gap between a thin metallic mesh and many support pillars that separate the mesh from the anode readout strips. 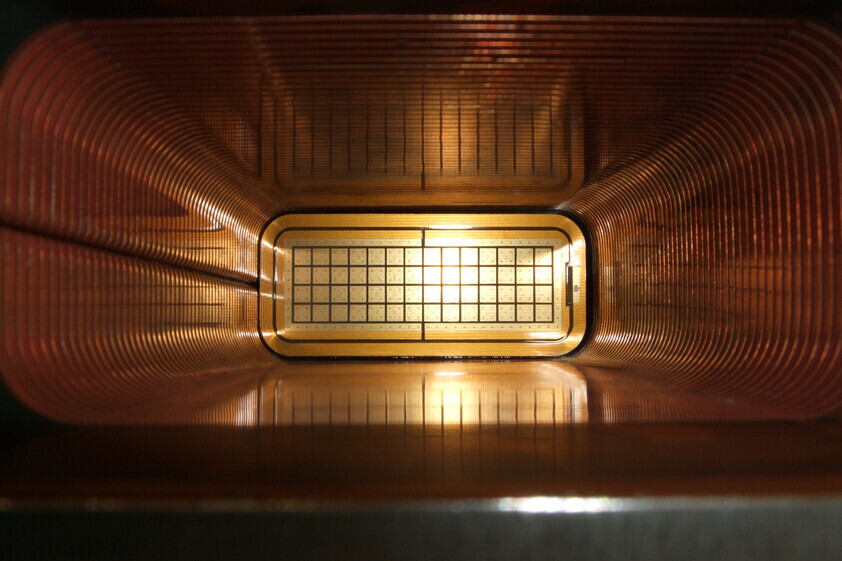 Copyright: RWTH Inside of a gas monitoring chamber

A gas monitoring chamber works using the same principle as the TPC in terms of gas ionization, electron drift under a static electrical field and electron gas amplification. However it is not dedicated to reconstruct tracks nor to identify particles. The main task of this chamber is to monitor the properties of the gas that is fed to the large volume TPC. This monitoring chamber uses a field cage surrounding a small sample gas volume connected to the same gas line that feeds the large TPC. Two important parameters can be extracted from the monitoring chamber. The drift velocity and the gain of the gas amplification can be derived. These two parameters are then used as calibration parameters for the large TPC. The drift velocity is used for the reconstruction of the z-component of the track. The second parameter is the gain which is used for calibrating the particle identification algorithms.

A gas monitoring chamber system is the contribution of our institute to the T2K experiment and operated there since several years successfully. 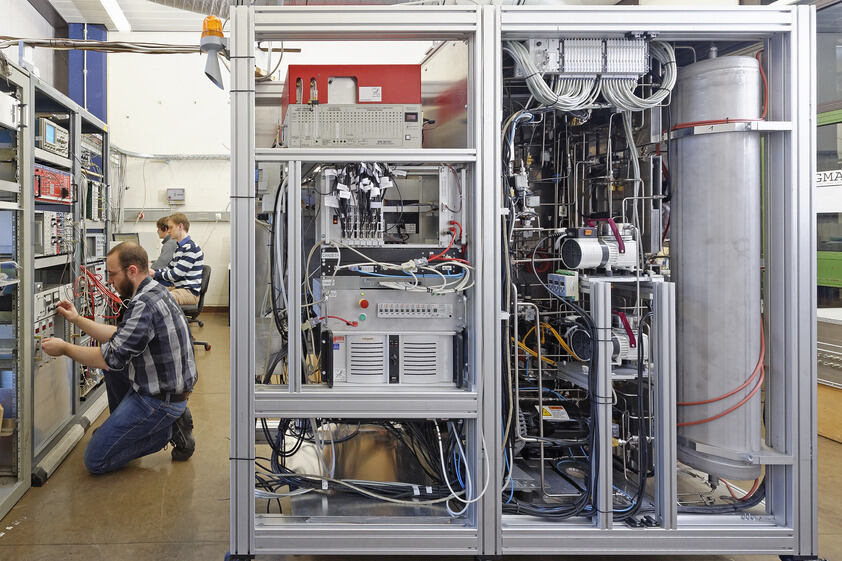 Recently, a powerful gas mixing system has been developed. It is able to mix up to three different pure gases or gas mixtures with a precision of less than 0.1 Vol.-% independend of the gas type used. At the same time, it can supply chambers with a defined flow and pressure. The whole system is computer controlled and can run without any manual interaction for weeks. The quality of the gas can be monitored by using a gas chromatograph and dedicated devices for monitoring the contamination by H2O and O2. For both contaminants optional filters exist, wich are able to remove them out of the gas flow. In addition to the control algorithms, alarms and interlocks are set to prevent that the connected detector is operated at unsafe conditions. During several Bachelor- and Masterthesis, different properties of gases have been studied. In combination with the Universal Gas Mixing System, a database was established to store the results and compare them with the corresponding simulation.

A TPC for the ILC (International Linear Collider)

The next large particle physics collider which will be built after the LHC at CERN is the International Linear Collider (ILC). It joins the efforts of the former regional linear collider efforts JLC (Japan), NLC (USA), and TESLA (Europe). This electron-positron linear collider will have a centre-of-mass energy of up to 800 GeV. Its acceleraton technology will be based on the superconducting design developed for TESLA at DESY. Details can be found in the TESLA Technical Design Report.

Our R&D project at the IIIrd Physics Institute concentrates on developing a novel readout system for the central tracking chamber of the detector foreseen at this collider. A likely choice for the tracker is a time projection chamber (TPC). We investigate a readout based on gas amplification with GEMs (gas electron multipliers).

The Project webpage can be found here.